The Awkward Side of Learning New Words 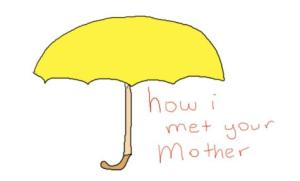 My favorite TV show is How I Met Your Mother. I can tell you about each episode in so much detail, that I get annoying.

Even though Barney Stinson (Neil Patrick Harris) brings along many hilarious moments, Ted (Josh Radnor) and the rest of the gang add their own funniness to it. This particular post is inspired by Ted’s “cha-mee-lee-on” incident. You see, Professor Ted Mosby, is talking about an architect to his students. This architect transforms his own work in order to adjust to the environment he is in, and Ted compares him to a chameleon, but does not pronounce it “chameleon” .. but as CHA (as in cha-cha)-mee-LEE-on.”

“Um, professor, do you mean ‘chameleon?'”

The students then shake their heads in disagreement. He learned that word by reading it, as we later find out when he is explaining the incident to Robin (Cobie Smulders).

But the thing is, that this happens to everyone whether we want to admit it or not. For me in particular, it is with names that I read in books. Currently it is the name Liesel in The Book Thief [can anyone help me out?]. But it does happen with regular words as well, and sometimes I only figure out how they’re pronounced when someone else says them, and even then I’m still confused about it because I had imagined it a whole different way in my mind.

How did people figure out how to pronounce vinegar? Vine and gar.. no. vine-gare? No. Ugh. Part of the blame for this can go to the English language (see, this post), I mean arches, architect, reaches, orchid, ketchup..

Kudos to you if you were able to read these and say them properly without ever hearing them pronounced.

I heard someone order a mow-cha latte at Starbucks a while ago, and even though I wanted to order the same thing, I ended up ordering a passion tea due to the confusion. Every once in a while I ask how something is pronounced, sometimes during normal conversation. I had trouble with the word scaffolding. *Cue: laughter*

Enough about me.. Here are some questions for you:

How do you pronounce the word “button”?  BUTT-tun, or but’n

If you’re from England, Australia, or have some cool accent, please share with the rest of us!

What words have YOU pronounced incorrectly the first time?

(Why yes, I do read your blogs, I follow all of you dudes and dudettes!)

When a person falls asleep next to you on the bus

We had some interesting discussions this past week via comments on what happens when you write what you’re thinking about instead of what you mean to write, but like Tim showed us, people also SAY the wrong things and it can lead you straight into awkwardness (and make you pay for someone else’s gas.. err, petrol). And like Venom and PCC mentioned, it can be difficult to have people speaking around you while you’re trying to write. We’re all getting signs made: “If you see me writing, please no talking”.

Anyway, my morning commute was awkward this morning, and I think it was karma doing its thing. You see, last week, I was laughing in the bus because some guy was falling asleep on a young girl sitting by the window. She kept adjusting herself trying to wake him up but the guy was knocked out! It was hilarious!

But then this morning: 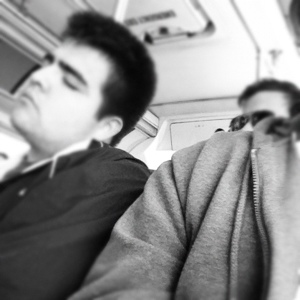 What do you do when they begin to lean on you?

I nudge them the other way, though I once did let some old guy lean on me. Oh and one time I pushed a guy too far and he almost fell.

What about when you reach your stop?

Waking them up is a little awkward, especially since they’re super confused afterwards.

Has this ever happened to you? Are you the sleeper?

Love: You KNOW This Story

Why do nice guys finish last? The girl ends up liking the jerk instead and blah blah blah.. its always the same thing. People have many explanations for this phenomenon.. why do YOU think it happens?

The topic of love is indeed an awkward one, from getting rejected, to awkwardness of dating life (yes, online too) , and dealing with exes.. so instead on focusing on the “why?” I’ll just .. uh, share this thing I made with you.

Share it with that one nice guy, who always finishes last.. he’ll get his turn. 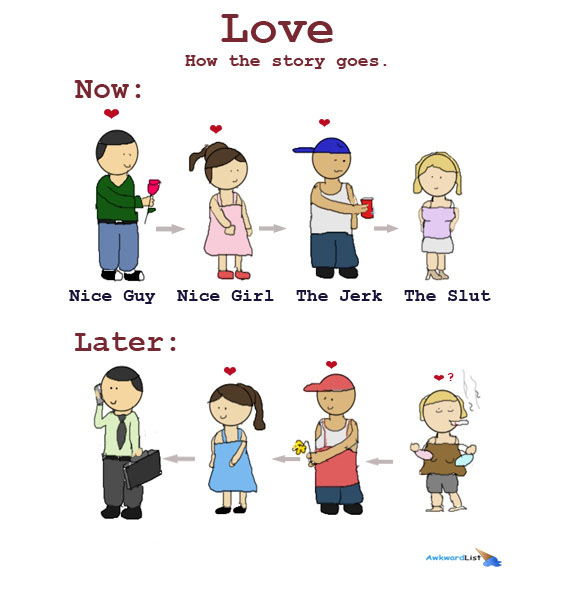 You’ll find some more of this random stuff on my Twitter or on Awkward List’s Facebook page!