Ok, honestly, what if your baby looks like this?

121. When you get introduced to an ugly baby, and are forced to fake an “Oh my god, he’s so cute” face

Some people have a real fear of having an ugly baby. Of course nobody really says it, but its one of those things that people wonder.. I’m assuming. I’m not a mother, and will most likely never be but why wouldn’t you wonder things like: What if they develop artistic abilities vs. technical ones? Will they be left-handed? And if you wonder those things, what is wrong with imagining what their height or level of ugliness will be?

Real mothers out there would defend against this by saying that they would love the child no matter what he or she looks like and that’s fine and that I’m being shallow blah blah blah, I’ll read and reply to your comments anyway, but that isn’t my argument here!

Your friend greets you at her front door and says to you,

“Hey, I’m so excited you’re here! Come on, he is playing in the den right now,” with a huge smile.

“Awesome, I can’t wait to meet him,” you reply, excitedly. 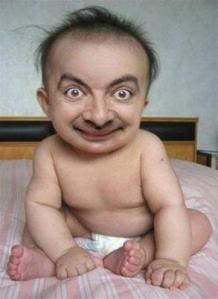 “Oh my–” you say, half choking on your own saliva, “he’s ad–adorable,”

Mothers get offended when you call their ugly babies ugly for some reason, I’ve seen it happen. At a Walmart (yes, it always happens at Walmart) while waiting in line to pay, a woman looked at the stroller of the lady behind her, and said:

“Oh my gosh! Look at you.. your clothes are so cute,” with her eyebrows up and in that weird voice people make when they look at babies (yes, we all know you have one too..).

“Isn’t she? Thank you,” the mother said.

“Her clothes really are!” the other lady replied.

Now I’m not sure if the other lady meant it in a mean way because quite frankly I don’t understand women and their multi-dimensional hidden messages, but I did catch a glimpse of the kid, and she looked like she had a wig on or something, nothing too weird. What happened after got awkward, FAST.

“Yeah, I’m sure yours were mini Angelina Jolies,” the angry mother replied.

I was behind them, and I left. Crazy stuff goes down at Walmart, yes I saw that video of someone getting run over by a shopping cart. Or was that Best Buy? Either way I was gone.

In my defense, both women were large.

I’ve been introduced to plenty of babies ugly and cute, and it usually doesn’t get too awkward because I follow a specific protocol.

2. Do not assume a gender. Nowadays people dress boys in pink and girls in blue sometimes in order to stay away from traditional gender roles. If you see the kid playing with a Tonka truck, DO NOT FALL FOR IT. Don’t even take earrings or bows as hints. Ok, that may be a little extreme but its better to be safe than sorry.

3. Know what to say: Compliment, ask a question, and smile. Compliments can be directed toward the mother or the child, questions can be about the child’s age, where the child was born, but stay away from questions like “Who is the father?” and stuff.

To look at pictures of ugly babies on TheChive, click here!

From: Uncategorized
← When Texting Gets Awkward
Oh no, I don’t need to see your ID, you’re obviously old →
11 Comments